Yup, these are the skates I’ve used all winter. And to be honest .. they are okay. But there are also some things about them that I don’t like.

Beginners may want soft skates, as they allow bending and flexing more. But as you progress, you’d want stiffer skates.

These skates are really soft, and I do feel them twisting a bit when I sprint, make sharp turns and hard stops. It’s not the end of the world. Whatever I try to do, I can still acheive, but if I did play serious hockey they would have been too slow.

These skates only have seven eveyelts on each side. Typically hockey skates have nine to eleven. Since my skates have few eyelets, it’s difficult to lace them to a real snugh tight fit.

The original laces are unwaxed. I replaced them with waxed ones, which helps. It only cost me about $5 so it’s a really cheap and effective upgrade.

These skates weigh 1150 grams each. That’s very heavy for ice hockey skates. Hockey skates are normally somewhere around 700 to 800 grams. For me this does not really matter though. I’m used to inline skates that are a lot heavier.

I don’t know what steel they used, but a fair guess is that it’s very cheap. And I do notice they get dull rather quickly, however this is also due to the kind of ice I skate on. Anyway, my point is that if cheap skates come with cheap steel, and they do need to be sharpened more often, this will make them more expensive to maintain.

These skates are good enough for me since I only skate for fun. Still, if I had to buy new skates today, I’d anyway go a little bit up in price.

I’d buy a stiffer skate with at least nine eyelets.

A beginner may be better off with very soft skates though.

A serious hockey player, of course, will need a lot better skates. For example, these skates are very heavy compared to more expensive skates. For me it doesn’t matter, as I only play pond hockey. 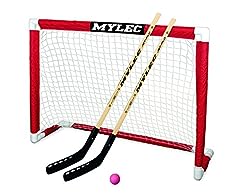 (1064)
Street hockey set includes two 43-inch Jet Flo sticks, one no-bounce hockey ball, and a goal High-impact PVC tubing and sleeve netting Goal measures 48 by 37 inches (W x D) Assembles easily in minutes Folds for easy storage (as of September 14, 2020 - More infoProduct prices and availability are accurate as of the date/time indicated and are subject to change. Any price and availability information displayed on [relevant Amazon Site(s), as applicable] at the time of purchase will apply to the purchase of this product.) 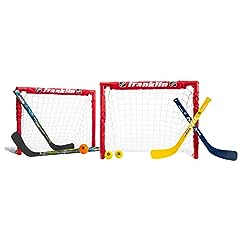 (1014)
Learn to play: The franklin future champs nhl kids hockey set is perfect for teaching your little athletes how to play the sport for the first time Easy assembly: Our insta set easy fold corner joints fold & lock into place to easily assemble or brea... (as of September 14, 2020 - More infoProduct prices and availability are accurate as of the date/time indicated and are subject to change. Any price and availability information displayed on [relevant Amazon Site(s), as applicable] at the time of purchase will apply to the purchase of this product.) 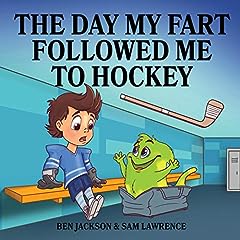 
The Day My Fart Followed Me To Hockey (My Little Fart)

(387)
The Day My Fart Followed Me to Hockey (as of September 14, 2020 - More infoProduct prices and availability are accurate as of the date/time indicated and are subject to change. Any price and availability information displayed on [relevant Amazon Site(s), as applicable] at the time of purchase will apply to the purchase of this product.) 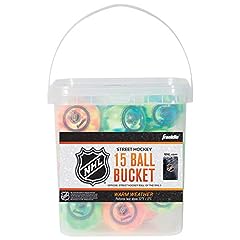 Official size: Standard weight, regulation size 2 5/8" street hockey balls High density: Designed with high density materials to ensure low bounce and increased roll Warm weather balls: These balls are designed for use above 32 degrees NHL Official: ... (as of September 14, 2020 - More infoProduct prices and availability are accurate as of the date/time indicated and are subject to change. Any price and availability information displayed on [relevant Amazon Site(s), as applicable] at the time of purchase will apply to the purchase of this product.)

Author: How To Inline Skate

This dude sucks at skating why is he doing tutorials lmfao

I am a beginner and I want cheap skates

Hes such a bender

I got Vapor x60s for 25 bucks that had waxed laces and were already broken in, Good deal?

I wen’t from supreme 140’s to vapor 1x’s within a year. The difference was huge. The 140’s were heavy and the holder felt cheap, the steel didn’t hold an edge long. I didn’t trust it. The boot was also soft asf. My 1x’s have been perfect. I rarely ever have to sharpen them. And they take hits well.

i wanna be honest, ur opinion on this is kind of irrelevant as youre terrible on ice…

I got CCM Jetspeeds for $60

Those are goalie skates dumb retard

how do you crossover?

All skates come with unwaxed laces.

My first pair of skates cost $14 used! They worked very well for just casual skating and before I decided to commit to spending $300. I think buying cheap at first, then upgrading is smart – lots of people will give up, so spending too much is a false economy! I enjoy your videos immensely, thank you for posting.

Do you live in canada?

Can a beginner use stiffer skates instead of soft ones though?

Change the steel. That will make it not be dull as quick

Where did u buy them?

In addition to the waxed laces, you might want to try and overlace them – that is go down through the top and out the bottom of the eyelet. As you tighten, it will cinch down on top of the lace exiting the bottom. The downside is the skates are much harder to loosen when you take them off!

where did you get them from